A couple of weeks ago my siblings and I met to remember our Mum and Dad who had both died in the month of May Mum on the 22nd May 5 Years ago and Dad on the 27th May  35 years ago.

My dear  dad Guy Walker served his country in the second world war, and often talked of his  fun times in Cairo and Italy. He and his friends looked on joining up as a great adventure and this photo of him in his uniform before he left shows some of that.

I don’t think any of us kids realized that he rarely spoke of the bad times and as he was in Egypt and at Cassino in Italy there must of been lots of them. He was a fun Dad liked to get down and play with us kids, had a good sense of humour and liked a social life. He always gardened vegetables and as I was a Daddy’s girl I used to love helping in the garden or with the other jobs he did.We girls had the most years with him as the my brothers were only 13 and 10  when he died very young aged 59 ,  and left my mum with three  grown up daughters and two  boys still at home.

My Mum and Dad met after the second world war, she was boarding next door to his family with an aunt. My father was dared by his brothers to go over in his pajamas and dressing gown and say he had heard she needed a man. It was a great joke and he was invited in and sat talking with her and her uncle and aunt of course. here is a picture of them on their first date and then their wedding day the 26 February 1949 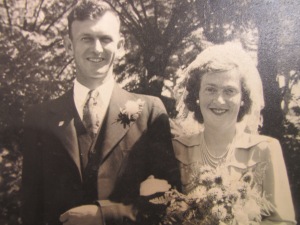 It was great to be together as a family and chat about old times and look through old snaps , most of them black and white but moving into colour as the years passed. My Mum lived until she was 86 and never remarried, she often spoke of Dad and the good and not so good  times they shared together.

Memories and old photos go together and I do worry that this will be lost in this digital age as so many photos are taken but rarely printed or shared except on social media. Ah well that’s the future What will be will be./  Que sera sera.

Mom’s birthday this year was the best! My cat after having to put up with all the wonderful idiosyncratic do das from mom, she stole the show and the day! The birthday cake became her obsession. She had the best piece that was saved for the birthday girl! I had the best laugh!!! Cat was […]

via The Cat Had The Cake — Cloud Walker

Over the past couple of months I have been getting out my paints again and also trying out drawing or copying from a book I have. So I have a mix of art journal pages to share with you today.Having my little puppy Gigi now I have to make sure I have taken her for a walk before I sit down in my craft area otherwise……….she gets bored and up to mischief.Fortunately after a 30 minute fast walk she is happy to collapse and snooze while mum plays with her stuff. 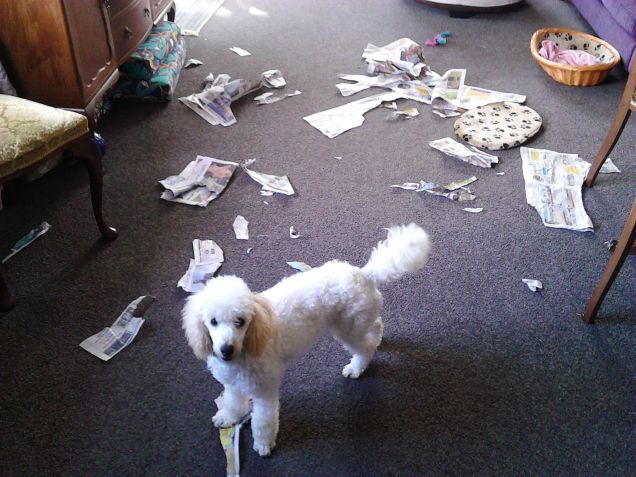 So here are some of my new page

Back in February I set off with a cousin on a road trip from Taranaki up to the Waikato, across to the Bay of Plenty, over to Gisborne down to Napier and then home. We had an amazing time. Our first goal was to visit Hobbiton which is the Film set from Lord of the Rings and The Hobbit movies. What an amazing place it was totally worth the entry price and exceeded my expectations. This set was rebuild for the Hobbit movies and this time the Farm owners requested that the Set be built of permanent materials in order for it to become a tourist destination. He worked with Sir Peter Jackson and his studio and it has been a triumph, also an economic success story for the Farm, Matamata and the surrounding area. It employs a large number of locals and draws tourists from around the world. Every detail is carefully crafted the clothes line for example came up to my knees and the clothes were all in proportion.It was a grey drizzly day but as you can see we still got good photos.

From Hobbiton we drove to Tauranga and the following morning we headed over to visit family in Gisborne on the east coast of the North Island. This small city prides itself on being the first city to see the sun. Captain James Cook sailed into the bay in 1769 and  as Cook was unable to gain many of the provisions he and his crew needed at the bay he gave it the name Poverty Bay. Now Poverty Bay is one of the more fertile areas of New Zealand and famous  for its Chardonnay,  fruit, vegetables and avocados, and abundant sunshine although we actually brought the rain from Taranaki with us. We had one fine day travelling over and then it rained. They needed it as it had been very dry but we wanted sun 😦  so not many photos. 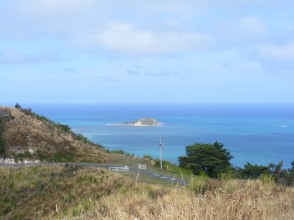 After a great time with Family and touring wineries we headed of in the rain to Napier to meet up with my Sisters and Brother in Law for the Napier Art Deco festival. More on that in the next post. 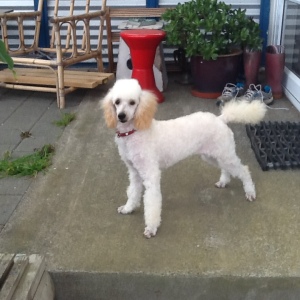 This lovely little lady joined my family on the 12th of January. She is a miniature poodle and I have named her Gigi. At 7 months old it is like having a mischievous toddler around the house and also involves house training oops a few puddles but it’s getting better. She has brought laughter into my house again. I am also getting out for walks every day as she is great motivation. Yesterday was a beautiful summers day so we went to the park. Gigi is full of energy for  an hour and then plops down for a wee nap until its time for the next burst. The recycling bin newspaper has taken a few hits bit its relatively easy to clean up. ha Ha she also uses my circular ottoman as part of her race track she is so quick its hard to get her on video as I am busy laughing. Oscar the puddy tat is not so impressed and only comes in at night when she is asleep in her crate. So he lives in the front gardens and Gigi has the back yard. She is actually good with cats unless they run away which Oscar does.Not too worry early days yet. Catch you all later bye

Its January the 22 and instead of summer we have snow on the mountain, strong winds and rain and it’s not very warm either. So what better place to be but in my art studio space. Having borrowed a book from my local library “Collage, Paint, Draw” by Sue Pelletier I decided to follow a lesson called “bird-cage drawing”. This is my interpretation using Reeve acrylics and modelling paste,a bird stencil from Montarga, some mixed paint pens including a gold one and a pencil and a stamp I was given for Christmas. 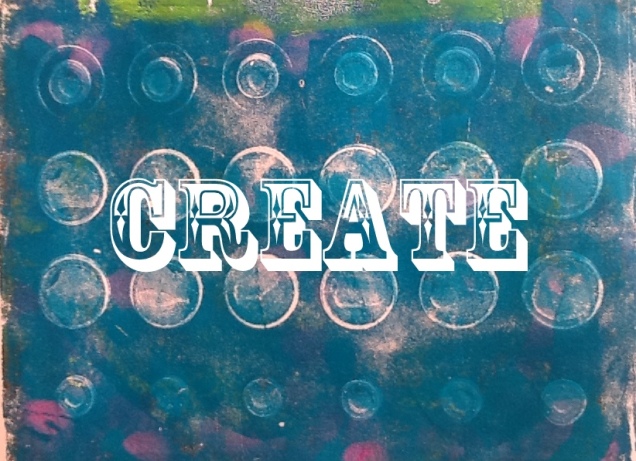 January 2017 a new year and while I am not doing resolutions I decided that I would follow a trend of folk I know that choose a word to guide, inspire and encourage them throughout the year. I chose Create because I felt that it could have so many different meanings for me.  For example I would like to create a fitter me; a pretty back garden, a newly decorated bedroom and of course more art.

My first play day was with the Gelli plates which I have not used for ages and ages. I had a wonderful time making lots of printed papers  that I could use for card making and for my art journalling. I decided that the kitchen was the best place to spread out and have fun so away I went, spending most of the day creating getting paint on my fingers and everywhere else ha ha 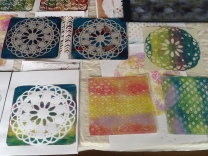 So My year is of to a good start. More exciting things to come soon in the next chapter

Today I want to wish all my followers Seasons greetings for this festive time. I know that we all have different ways of celebrating and also different faiths but this is the time of the year for me to celebrate Christmas. Being a December baby I have always loved Christmas time, the carols, decorating the house and bringing in the Christmas tree or even putting up the fake one; the family traditions and then joy on  peoples faces as they gather with their families and friends.

This year is a little different its been harder somehow to get into the spirit of the season. My decorations are more low key as I have no family visiting this year, I am going to my sister’s for Christmas Lunch then back to my Brother’s for the evening meal.

There have also been so many momentous happenings here in New Zealand with another major earthquake shaking us badly and creating chaos and recently our Prime Minister suddenly resigning,. Internationally Donald Trump in America winning the Presidential race, Brexit in Britain and so many injustices around the world in war zones and terrorism in cities like Paris and just last night Berlin. just to name a few.Each year we ask for Peace but it never happens.

I guess that the best we can do in our small corner of the world is to share love and happiness with those close to us and  in our community  too. As a country far away from the unrest of the world we are known to be generous and supportive of those in need all over the world as well as in our own backyard. We must all lead by example and show the way  so I wish you all

Joy, Peace and Happiness this Christmas and for the coming Year. 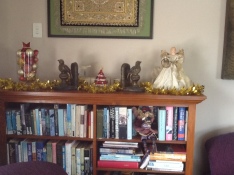 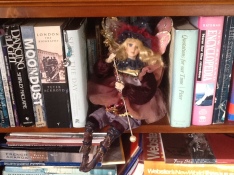 I watched the USA election results unfold and felt sad at the outcome. I know that everyone who voted, voted with their hearts and minds  in the way they wanted. But I fear for the moral compass of America now in the hands of people who seem to only consider material things as important and appear to have little regard for women, other races and the rest of the world. The “I” appears more important to them than the good of all.

So for the first time I woke up and decided to paint out my feelings onto canvas.I took an old brightly coloured early attempt and covered it up and let my feelings direct me.This is my tribute to you all, I have left some splashes of colour peaking out  as I know they will be there as the silver linings in the dark cloud.

My thoughts are with you all at this turbulent time

The Art of Cobwebs

aka The Cobweborium Emporium

Taking the journey, bumps and all

Windmills of My Mind

When the wind of change blows, some people build walls others build windmills- Chinese Proverb

my art, my family, my life - but mainly my art!

A blog full of humorous and poignant observations.

What if you spent every day looking for One Beautiful Thing?

Mark Simms Photography
Sixty and Me
dancingintheraindotcom2
Blog at WordPress.com.